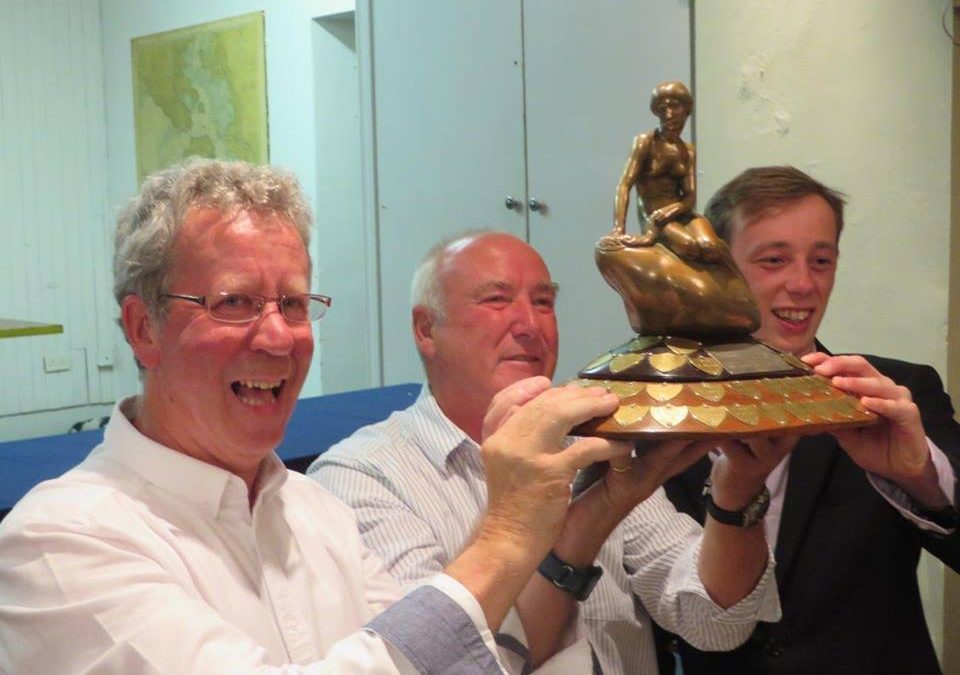 Following a tough, initial 4 days of racing at this year’s Dublin Bay Mermaid National Championship at Skerries Sailing Club the 2 remaining days saw the leaderboard again changing daily. Ultimately in what was a very close finish, reigning Champion and local boat 189 Azeezy, helmed by Sam Shiels with crew Con Bissett and Eoin Boylan proved victorious and managed to retain their title for the 2nd year running. For those who know how difficult it is to win it once, you can truly appreciate just how impressive an achievement it is to win it 2 years in a row.

Just pipped to the post was 77 Tiller Girl from the National Yacht Club helmed by Jonathan O’Rourke with crew Carol O’Rourke and Alan O’Rourke who finished 2nd overall and who had been leading coming into the final race of the Championship. With only 1 series point between the 2 top boats, Jonathan certainly didn’t make it easy but Sam won out in the end with all of his 8 final, counted results as top 5 finishes. Third place overall was won by Foynes boat, 188 Innocence helmed by Darragh Mc Cormack with crew Mark Mc Cormack and Johnny Dillon. With a breezy first day to the Championship, Darragh had gotten his event off to a cracking start and had been leading overall up to day 3 but the light airs that set in and dominated the majority of the racing made it next to impossible to keep the likes of 77, 189 and 186 at bay.

Outside of the overall National title, 2 other coveted trophies were being raced for during the week including the Daphne trophy and the Designer. Again, in testament to how close the racing really was, both these trophies were still to play for coming in the final day of racing on Friday the 11th of August. The overall winner of the Daphne trophy was 134 Jill from the Royal Irish Yacht Club helmed by Paul Smith with crew Anne Smith and Pat Mangan. 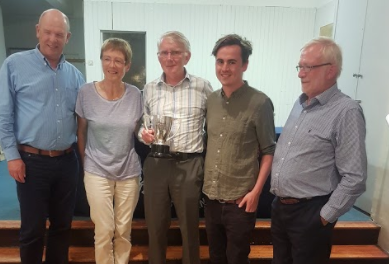 The Designer overall was won by another local Skerries boat, 146 Fugitive helmed by Paul Browne with crew Brendan Dunne and Jennifer Shiels. Many people remarked on how much this particular boat improved over the course of the Championship with Fugitive finishing 13th overall in a very competitive fleet of 26 and securing 2 top 10 finishes during the Championship. 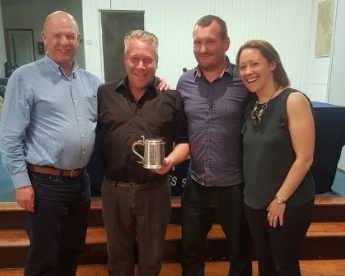 Leading into the final day of Championship racing, Shay’s Alternative Prizegiving on Thursday evening in the club was especially welcomed. A night of classic Mermaid-style entertainment was held at the club including Mr. & Mrs (the crew edition) and simulated start lines involving crews in conga lines and fancy dress. All the competitors had a great laugh and it was a perfect opportunity to relieve stress and nerves going into the final day of racing.

Friday the 11th of August saw one final Championship race in windy and gusty conditions that decided the overall winners. Thankfully there were no capsizes (although a few close calls!) but a broken boom and a broken tiller saw 2 boats knocked out of the race and 2 boats OCS all kept the results interesting. With fresh, windy conditions, Foynes boat, 188 Innocence won the race with a considerable lead securing him 3rd place overall. Coming back in from the race area, an elated crew from 189 Azeezy jumped in and swam to shore in celebration of their win!

That evening the well known prizegiving dinner took place at Skerries Sailing Club with every seat in the house full. Daily prizes were first awarded followed by great speeches from Skerries Commodore Kieran Branagan and Skerries Mermaid Class Captain Brian McNally. Glass prizes for 1st, 2nd and 3rd place overall were then presented by the club followed by the overall winners of the Daphne and Designer. Then it was over to the Mermaid Sailing Association President Des Deane to award the coveted perpetual trophies and some prizes from class sponsors. A brand new pair of Dubarry Ultima Sailing boots was won by Brendan Martin and newcomer to the fleet Del Brennan won the top prize of the night: a brand new UK McWilliams Mermaid jib presented by Graham Curran. Graham who had been out watching racing that day had some lovely words to say about the uniqueness and fantastic atmosphere of the class and was delighted to see the new sail go to such an enthusiastic and well-liked member of the Mermaid fleet. 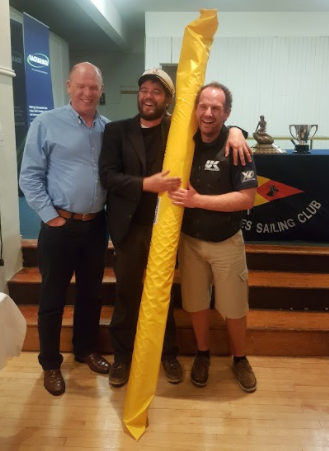 Del Brennan of 173 Jubilee is the lucky winner of a brand new UK McWilliams Mermaid jib presented by Graham Curran.

With the designer tankard awarded to 146 Fugitive and the Daphne cup to 134 Jill there was one final presentation to make and the Mermaid perpetual trophy was awarded to 189 Azeezy for the 2nd year in a row. Sam with crew Con and Eoin made their long walk from the back of the club to a huge applause and standing ovation and Sam gave a fantastic speech thanking his club, the class, his family and crew among others. 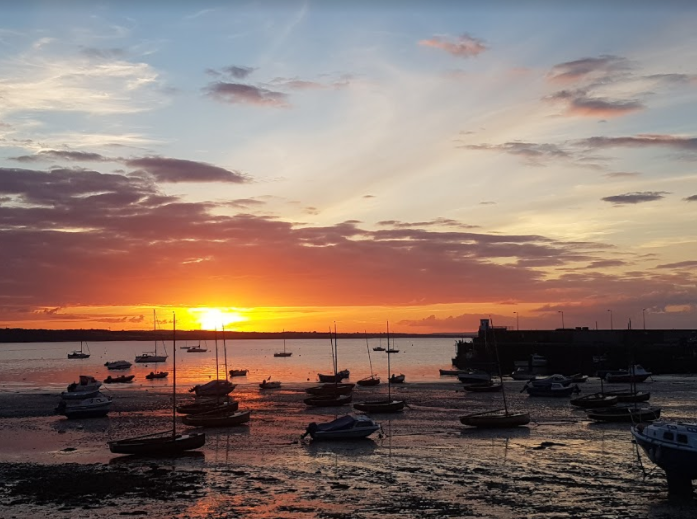 The sun sets on Saturday the 12th of August and Mermaids rest up after a busy week in Skerries.

It is no easy feat to run a week long National Championship event but thanks to a great group effort from Skerries Sailing Club, the MSA, all the volunteers, sponsors, competitors and everyone else involved (there are far too many to name) a fantastic week of sailing, socialising and entertainment was had by all. The next and final event on the 2017 Dublin Bay Mermaid calendar is less than 2 weeks away at Rush Regatta on the 26th and 27th of August. 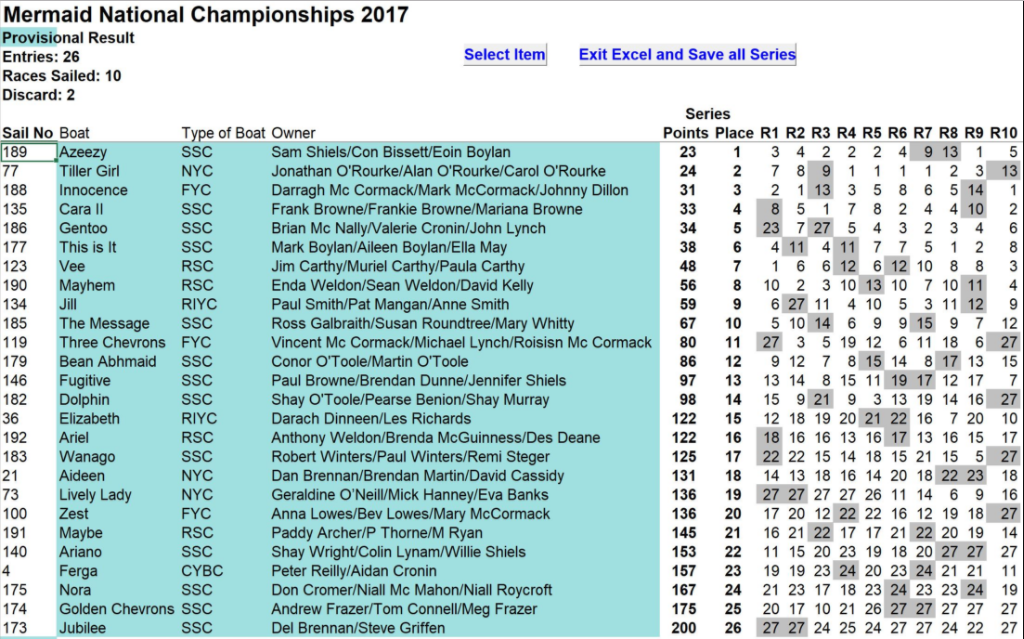