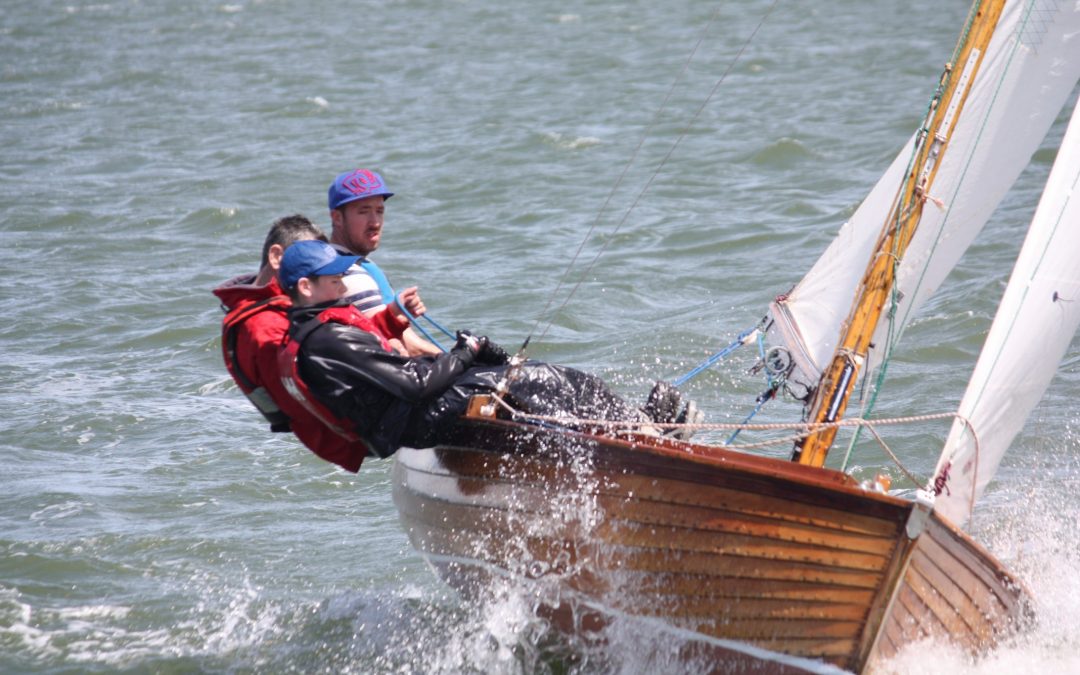 This weekend saw the 2017 Dublin Bay Mermaid Munster Championship take place at Foynes Yacht Club. With boats visiting from Skerries, Rush and Dun Laoghaire, competitors were thrown straight into it with 3 races in demanding conditions on Saturday. Overall results were so consistent there was no disputing them. First overall went to the reigning champ from 2016, 188 Innocence, helmed by Darragh Mc Cormack with crew Mark Mc Cormack and Johnny Dillon.

Saturday morning saw the club in Foynes a hive of activity with tents pitched, masts going up and boats being rigged. Volunteers buzzed around getting everything organised and the forecast showed plenty of wind promising to get the planned 3 races completed. A quick briefing at 11am advised the regular Olympic course would be used with 3 races back to back. Boats launched straight away to be out on the course for first gun at 12:30pm.

A total of 11 boats lined up for the first start in a steady 18 knots gusting 25. With a flooding tide for the duration of the racing, left was the only way to go on the beat. The tide pulling onto the windward mark made for hard calls on the layline with many tacking too early and a few people hitting the mark and doing penalty turns. With the wind at its strongest in the first race the first gybe mark proved too much for a lot of boats with 2 retires, a few broaches and a lot of gear failure! 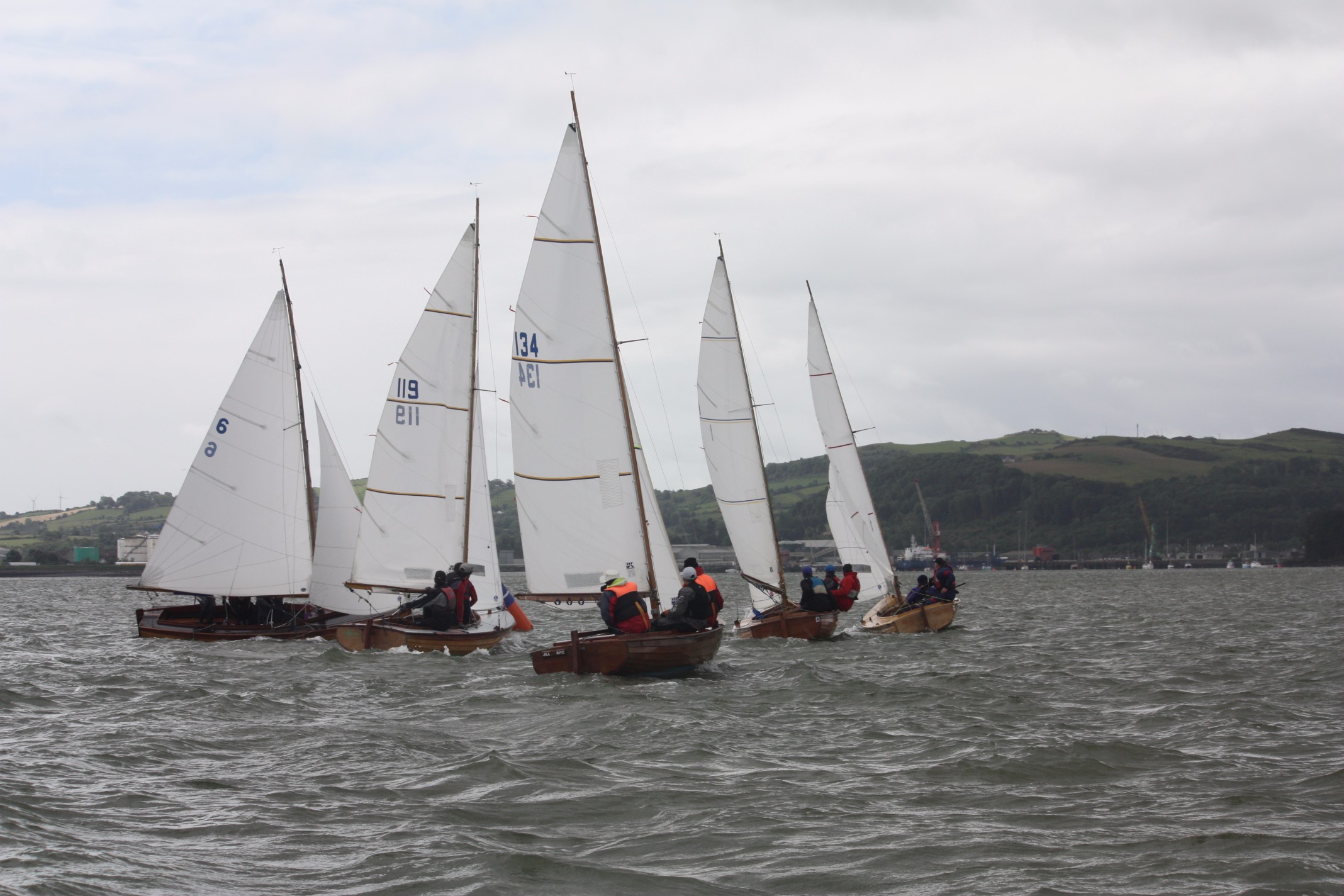 A busy windward mark, nothing new for Mermaids!

Darragh Mc Cormack, the reigning Munster Champion on 188 Innocence had a flawless day, with perfect starts in all 3 races, calling tactics and laylines to a tee and with plenty of clean air, he closed out the day with 3 firsts. With the format of 4 races with one discard, he already had the Championship in the bag and didn’t even need to come out on the Sunday. Second place was similarly tied up on the Saturday with a fantastic performance from Skerries boat Frankie Brown on Cara II who was 1st around the windward mark in the majority of the races and gave Innocence some great competition. Ultimately the reigning champ proved too difficult to hold off with great boat speed and tactics to gain him the lead overall.

Rush boat 123, Vee had a great first race finishing in third place but the second race saw them break their mast and retire from the Championship overall. Very unfortunate as this well known, competitive boat who finished 2nd overall last year would have been expected to give Innocence and Cara II a good run for their money. 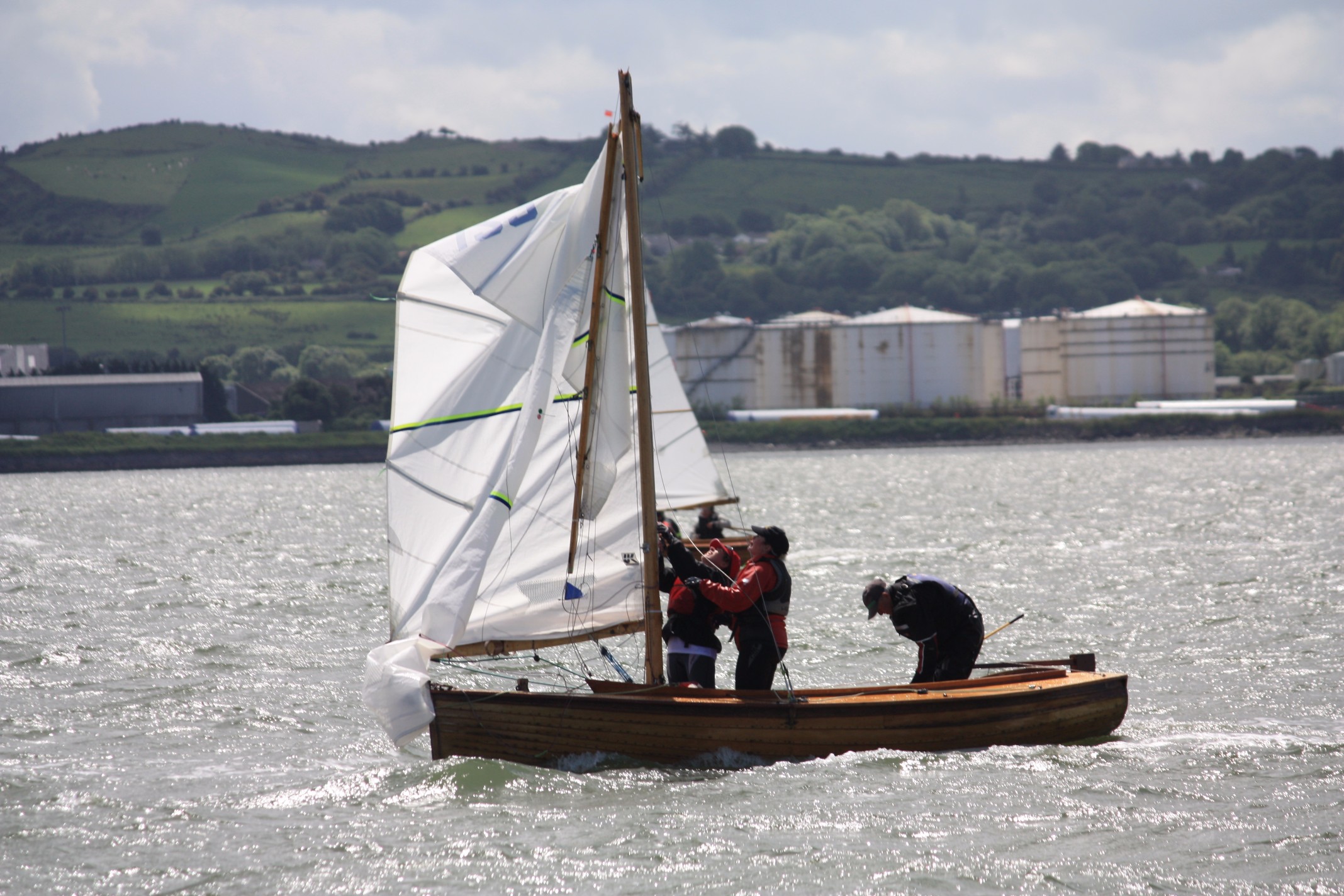 Local Foynes boat 119 Three Chevrons had to retire in the first race following a bad gybe which saw them break their horse along with some other minor gear failures. They were back in the game for the remaining 2 races on Saturday where they secured 2 thirds. The last race on Saturday saw a close battle between Frankie Brown and Vincent Mc Cormack fighting for 2nd place. On the last reach Vincent came from behind to get the overlap on Frankie Brown coming into the leeward mark, with all 3 crew hiking as hard as possible it looked like they were going to pull it off until the toestrap broke! With both crew in the water, one hanging on the end of the jib sheet and the other on the spinnaker sheet, Vincent sailed on, Michael Lynch still keeping the kite full as he dragged behind the boat. They managed to get back in and finish the race in third but Frankie now having 3 seconds had secured his place as 2nd overall and also didn’t need to race on the Sunday. 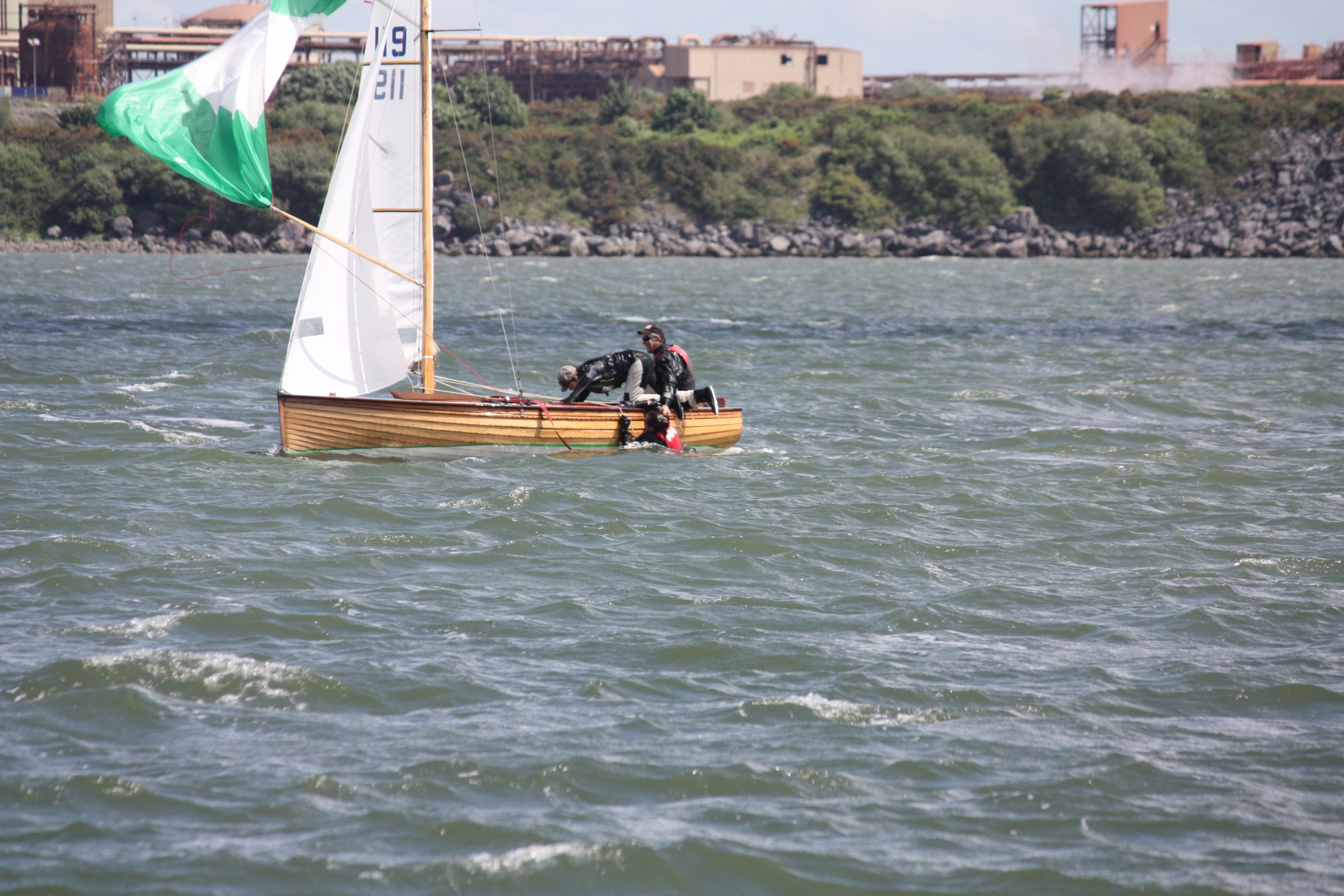 Crew overboard! 119, Three Chevrons in a spot of bother!

Following a long and demanding day of racing, Saturday afternoon saw a visit from local Gandalows who held a race in front of the club and brought their beautiful boats ashore for visitors to see. Dinner at the club house that night was followed by excellent entertainment from live band ‘Flog the Dog’ with everyone loosening out the muscles and getting some good stretching in for racing the next day.

Sunday saw similar conditions with a slightly lighter breeze (16 knots) and with only one race planned things got underway quickly. A clear start saw Darragh Mc Cormack gain an excellent lead on the first beat after which he proved uncatchable. With 1st and 2nd place overall secured the real battle was for third which was still up for grabs with a number of boats in contention. A great race between Noel Mc Cormack on number 1, Pearl and his uncle Vincent Mc Cormack on 119, Three Chevrons saw 119 prove victorious securing them third place overall with 3 thirds, and Noel finishing 4th overall with 3 fourths!

The weekend saw a number of new, younger faces out on the water crewing as well as a new junior helm, Dylan Reidy sailing number 6, Daphne. A big thank you to all the volunteers who helped out and the event sponsors including main sponsor Niaron Construction and MSA Sponsors North Sails, Union Chandlery and UK McWilliams. Overall it was a highly eventful Championship and the Mermaids are already looking forward to their next event, the Leinster Championship which takes place in conjunction with the Volvo Dun Laoghaire regatta from the 6th – 9th of July. With 15 boats already pre-entered it’s shaping up to be a great return of the Mermaids in big numbers to Dun Laoghaire. Final deadline for entry is the 30th of June. 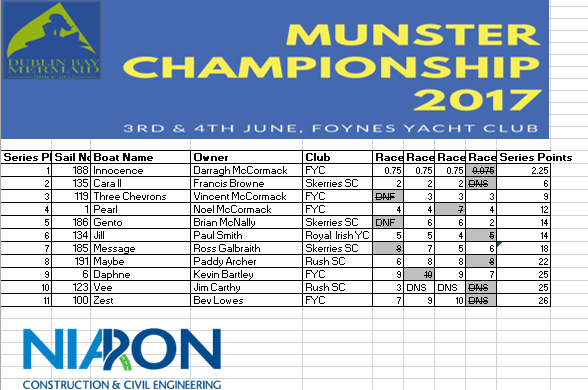 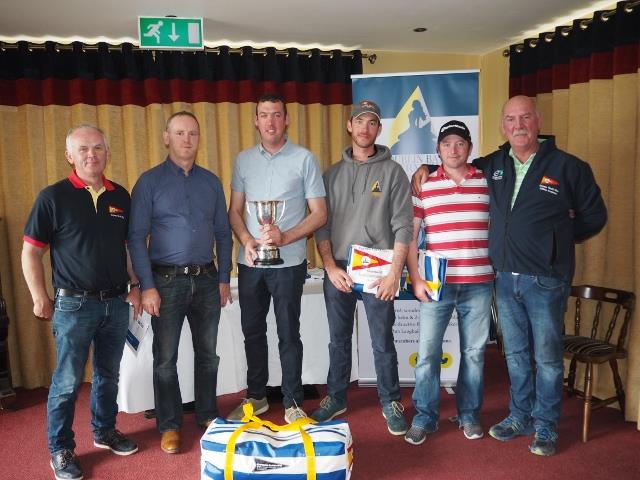 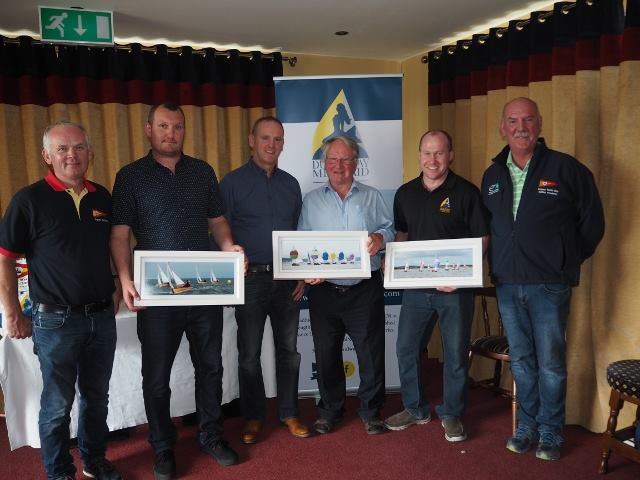 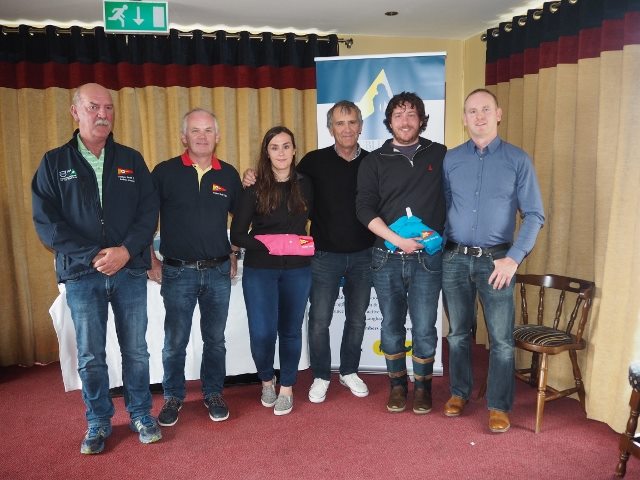 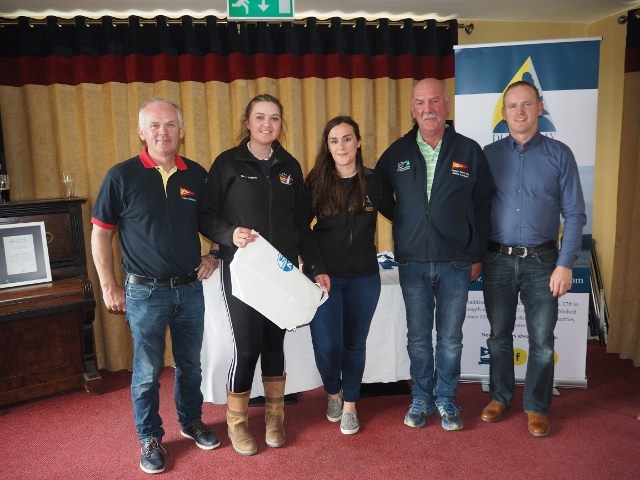 Presentation to the only junior female taking part in the event, Mary Mc Cormack with prize kindly donated by MSA Sponsor North Sails. 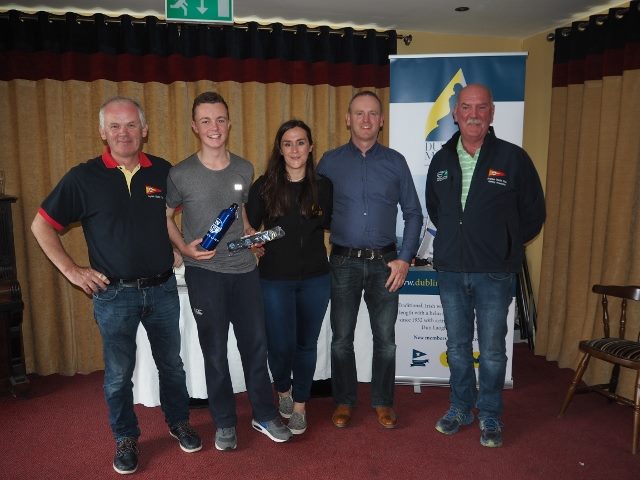 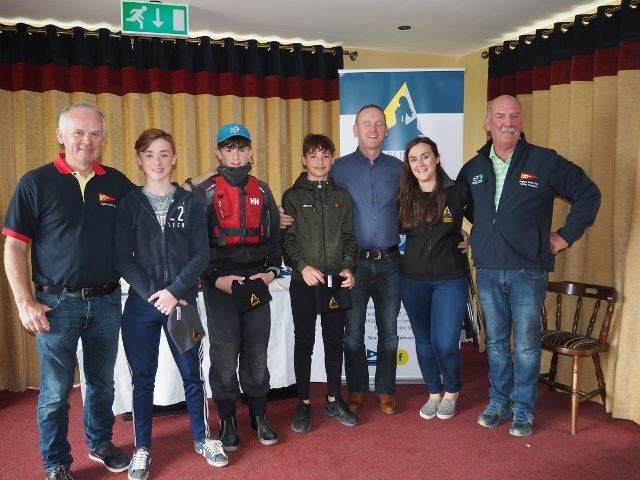 The event saw a number of youths crewing on the Mermaids for the first time. They did a brilliant job in very demanding conditions and were presented with tokens of recognition on behalf of the Mermaid Sailing Association. 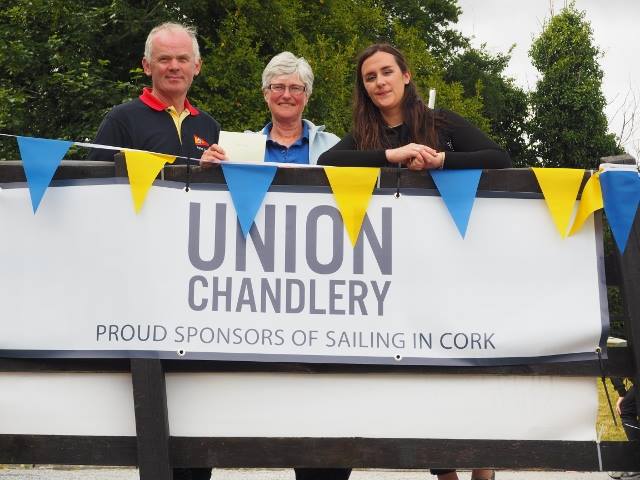 Congratulations to Valerie Cronin from 186, Gentoo who won a voucher kindly donated by MSA Sponsor, Union Chandlery for the event! 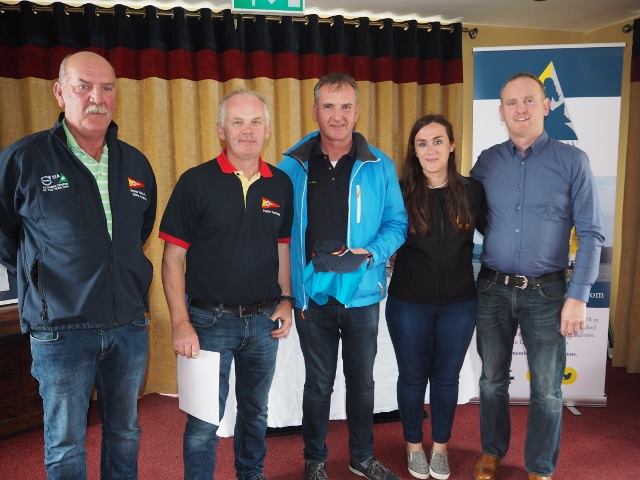 Thanks to D.O.D. for the event, Donal Mc Cormack and all the race committee and volunteers who helped make this such a great weekend!