A wild weekend in Wexford 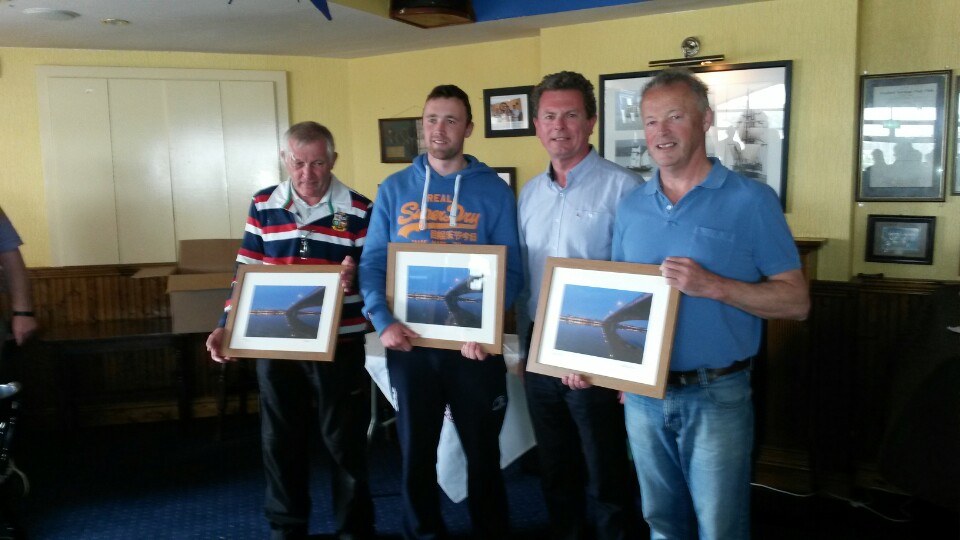 Mermaids that headed to the Leinster Championship in Wexford last weekend no doubt had been keeping a close eye on the weather forecast in the lead up to the event. Steady winds of 21 knots with gusts going up as high as 30-33 forecast for the Saturday had everyone wondering if racing would even be possible. Fortunately Wexford Harbour Boat and Tennis Club has unique race area options available to them and a wise decision by Race Officer Michael Conway to move the racing into the inner harbour where the water would be flatter and the racing area more sheltered meant 2 races were successfully completed over the weekend to constitute a championship. 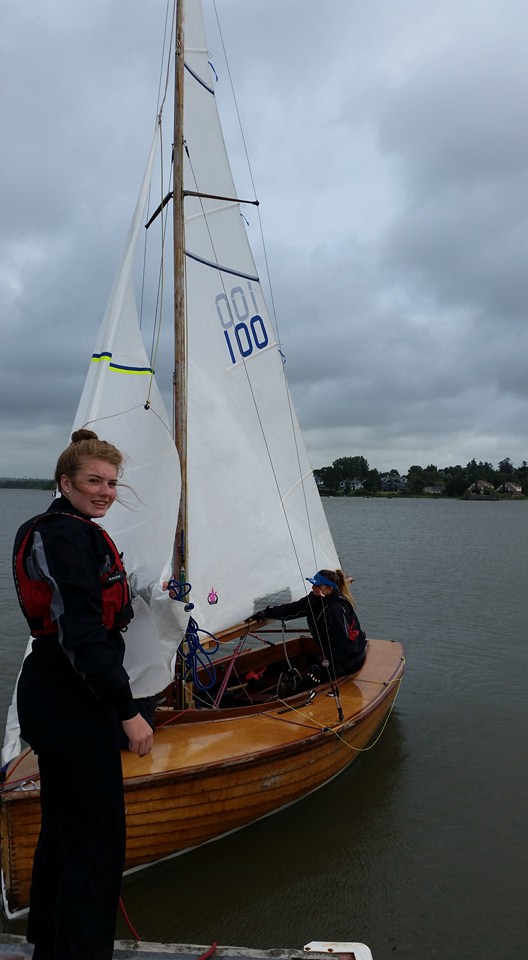 Saturday morning saw blustery and wet conditions for the 10 mermaids that were rigging up alongside some Fireballs in the
boatyard. A briefing at 10.15am advised that 2 races would aim to be raced on the day with 1 race the following day. There was definitely a sigh of relief as the class realised they wouldn’t need to worry about getting boats out under the bridge to the outside harbour area, which would have posed some serious difficulties given the conditions. 10 boats launched aiming for an 11.25am start but everyone realised quite quickly that the winds were living up to (and exceeding) their forecast strengths. The further offshore the boats sailed, the stronger the wind and in particular, the gusts, grew making for very lively conditions. The start line was a testament to just how difficult conditions were with most boats very far off the line on the gun. Within 5 minutes of the first race 2 boats had retired – 119, 3 Chevrons sailed off the start line and immediately headed for home as they realised they were sinking quite quickly (this was later discovered to be because of a 5 ft crack in a plank by the keelbox) and 191, Maybe made the wise decision to retire due to an injury that meant the crew weren’t at 100% (something which was essential on this particular day!). A particularly nasty capsize for 146, Fugitive also took them out of the race meaning only 7 boats finished the first and only race of the day. Derek Joyce on 187 Zuleika with his crew James Sinnott and Cillian Joyce made a very welcome comeback to the fleet and certainly didn’t disappoint as they comfortably secured a 1st place on the day. 2nd place went to Jim Carthy’s 123, Vee and 3rd place to Paul Smith on 134, Jill. As soon as the first race was completed, all further racing for the day was abandoned and the Mermaids headed back to the safety of land, a very wise decision as wind speeds were forecast to increase throughout the day.

Sunday the 10th of July saw similar conditions as 7 Mermaids headed back out to the inner harbour racing area for 1 final race. Lively conditions again kept everyone on their toes and thankfully there was only 1 retiree on the day. 188, Innocence who had been leading the race decided to fly the spinnaker and ended up breaking their mast which took them out of the race. The top 3 finishers emerged with incredibly consistent results. The new overall Leinster Champion, Derek Joyce on 187 Zuleika won with 2 firsts, Jim Carthy on 123 Vee secured 2nd place with 2 seconds and 3rd place went to Paul Smith on 134 Jill…with 2 thirds! 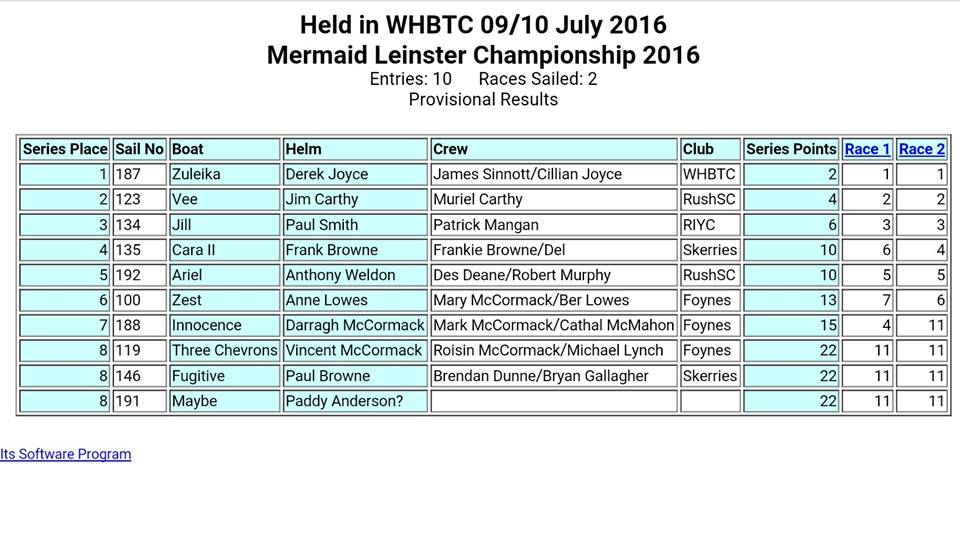 Final Results of the racing: http://www.whbtc.ie/upload/MermaidlLeinsterJuly2016os.html

A huge thank you to Wexford Harbour Boat and Tennis Club, in particular Michael Conway, Derek Joyce and Bryony Berry for their help in the preparation of the event as well as all the other fantastic volunteers who helped on the slip, in safety boats, in the bar, registration and elsewhere, we got a very warm welcome which was much appreciated. It was was a long overdue visit to Wexford and a great weekend was had by all. Now we look forward to our next event, Skerries Regatta on the 23rd and 24th of July, our last Regatta event before the National Championships, we hope to see you all there. 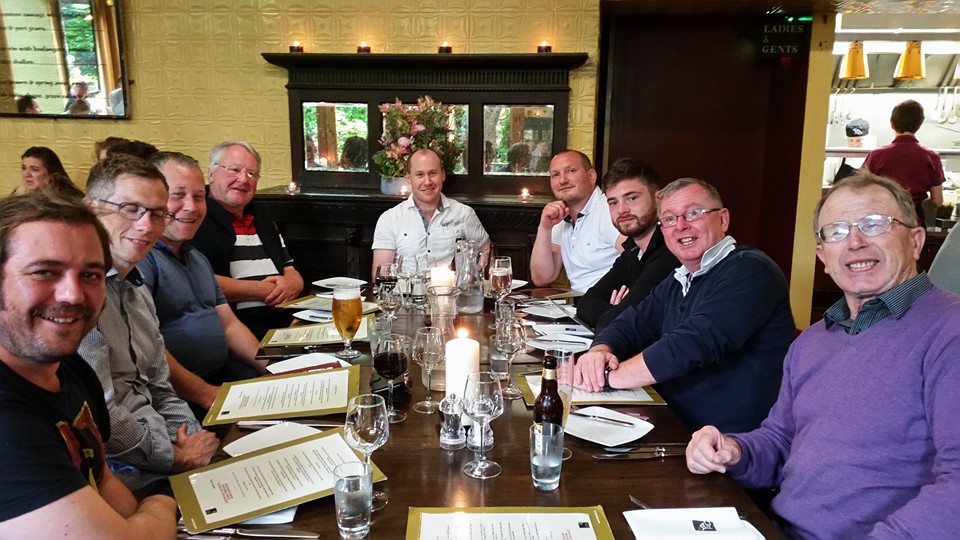