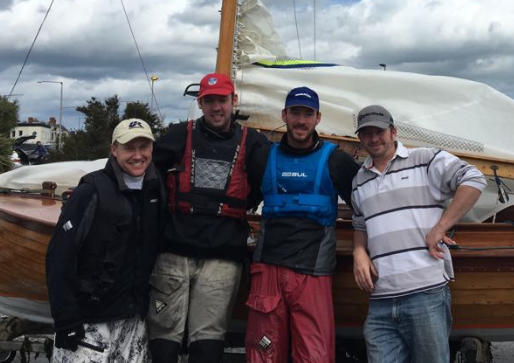 Last weekend, the 16th and 17th of June, saw the Dublin Bay Mermaid fleet making a very welcome return to Clontarf Yacht and Boat Club for their 2018 Leinster Championship event. In what were undoubtedly testing conditions for the fleet with challenging high winds gusting 30+ knots, the host club pulled off a very successful event with 4 races completed as scheduled, great food and entertainment and an overall very well run event both on and off the water.

The morning of the 16th saw 14 Mermaids registering for the event with a mix of boats travelling by trailer, sailing ‘around the corner’ from Dun Laoghaire and 5 boats making the longer journey up from Foynes. The conditions called for more safety and care being paid to launch which delayed the start by approx. 30 minutes. Once all boats were out, there was no waiting around and the race committee got Race 1 underway immediately.

The first beat saw a very close fleet with the top half getting to the windward mark within seconds of each other. Foynes boat Three Chevrons 119 was first around the mark but with Darragh Mc Cormack 188 right on their transom. The boys on 188 proved they had the edge getting their kite under control and beating 119 to the gybe mark. It was at this first gybe mark that all hell broke loose… 119 was first to capsize shortly followed by 135 Frankie Browne, the 2 boats now trying not to crash into each other with lots of crew and sandwiches in the water. A few other broaches and capsizes kept the rescue team very busy and for a finish 4 boats had to retire from the race. Darragh Mc Cormack kept a cool head and sailed an excellent race getting him his first bullet of the Championship. Rush boat 191 Paddy Archer also had a great race finishing 5th in what was extremely challenging conditions and fair play to Frankie Browne on 135 who after capsizing still managed to secure a 10th place for himself.

Race 2 and Vincent Mc Cormack on 119 was out for revenge, getting a good lead right off the start line and lengthening it throughout the race to secure them first place. Skerries boat, 177 This Is It helmed by Mark Boylan gave them a good race finishing a close 2nd with 188, Darragh Mc Cormack coming 3rd. The wind had picked up for this 2nd race with 6 boats not finishing due to the conditions. Very unfortunately for Frankie Browne on 135 having already come back from a capsize, it seemed luck was not on their side and they broke their mast in this 2nd race taking them out of the remainder of the Championship. New young helms such as Oisin Finucane and Anna Lowes proved very consistent throughout the entire Championship and should be commended for getting strong results in conditions that even the most experienced of boats struggled with.

Race 3 and the wind was showing no signs of letting up. The competitors were dropping like flies as a total of 7 boats did not finish the final and most trying race of the day! Darragh Mc Cormack locked in his lead as the main contender for the title getting another bullet with Skerries boat and reigning National Champion Sam Shiels finishing 2nd with a very good race. Mark Boylan kept himself consistently in the top 3 securing 3rd place and the first day of the Championship racing came to a close. Masts were broken, sandwiches were lost, and the battered fleet headed in for a hard-earned pint in the sunshine.

That evening Clontarf put on an excellent BBQ followed by great entertainment from their local Ukelele choir and a packed clubhouse socialised with top-class banter after what was a very eventful day. The next morning saw a fantastic spread of freshly baked scones, tea and coffee greeting the competitors as they arrived for the last race of the Championship. No delays this time and the fleet were underway bang on time at 1:45pm. A very close race between Darragh Mc Cormack and Mark Boylan ultimately saw Darragh take the lead by going left on the beat. Newcomer to the fleet, Darrach Dineen on 121 from the Royal Irish Yacht Club had an excellent race, holding 3rd place for a large majority of the course only to be caught by Sam Shiels and knocked back to 4th, an excellent result and the fleet now crowning 121 as ‘one to watch’. Another new, young helm Ross O’Shea who recently became the proud owner of 114, Nichapando had a great race finishing 6th under the guidance of Mermaid guru Enda Weldon. 4 races now in the bag as planned and the undisputable new Leinster Champion was crowned, Darragh Mc Cormack on 188 Innocence from Foynes Yacht Club claimed the title with 3 bullets (1 race discarded). With thanks to his crew Mark Mc Cormack and Johnny Dillon (plus Frankie Browne Jnr who crewed on the 17th in place of Johnny).

The prizegiving quickly got underway with Vice-Commodore Aidan Cronin leading the proceedings. Prizes were awarded to: 1st overall Darragh Mc Cormack on 188 Innocence, 2nd overall Mark Boylan on 177 This Is It and 3rd overall Sam Shiels on 189 Azzezy. Clontarf Yacht & Boat Club also very generously awarded a bottle of wine to every competing boat, they even got a choice between red and white! Roisin Mc Cormack, Captain of the Mermaid Sailing Association had the following words to share at the prize giving event on behalf of the MSA:

“This has been a very important and special event for us. The Mermaids have such a long history and association with this club and seeing Peter Reilly’s Dublin Bay Mermaid number 4, Ferga return to the fleet last year was a significant milestone that reminded us that we need to keep building on this renewed interest. The Mermaid class is on the up with 5 new boats joining the fleet last year and already another 4 this year. With 27 boats entered in our 2017 Nationals we are incredibly proud of our growing fleet and are delighted to see a number of new young helms joining. We commend Clontarf Yacht and Boat Club on hosting an incredibly enjoyable and successful event, the welcome could not have been warmer and you have done your club extremely proud, the Mermaids are already looking forward to their next visit!”.

Congratulations to all the competitors who made the event so enjoyable. The next event for the Dublin Bay Mermaids is Skerries Regatta hosted by Skerries Sailing Club, the 28th and 29th of July.