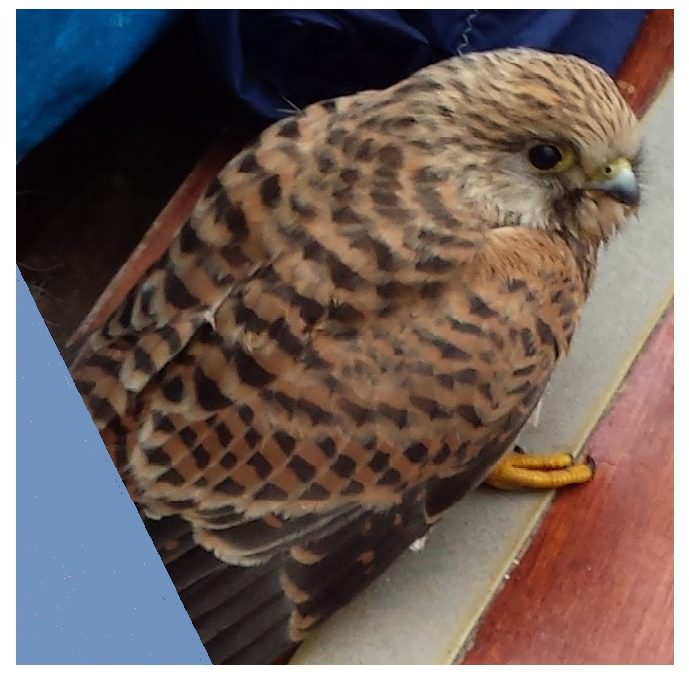 A Kestrel landed in Aideen, a Dublin Bay Sailing Club Mermaid competing in one of the Dun Laoghaire Fleets special races around Dalkey Island on Sunday 1 August. (see picture).

Interviewed after the race the Kestrel said “It has always been my ambition to sail in a traditional hand crafted wooden boat. I could land in a modern mass production boat any day of the week, but I wanted the real classic boat experience. I saw the beautiful five boat Mermaid fleet under spinnaker running towards Dalkey Island and couldn’t resist the temptation to try out a Mermaid. I was not disappointed, the Mermaid handled beautifully in the breeze. We were a bit behind when I landed aboard but the fleet came together at the back of the Island where the tide had started to flood and we worked our way into the lead by playing the shifts and getting into the strongest tide as we returned through Dalkey Sound. The breeze was very shifty with lots of holes as we passed through the Sound and beat back to Dun Laoghaire. My skipper did well but was outfoxed by former three times National Champion, Jonathan O’Rourke in Tiller Girl who was the 2016 winner of the Meg Mug.” The Mug is named after Meg of the Muglins and is raced for each year by the Mermaids around Dalkey Island.

She added (because she was a proper lady Kestrel and quite a rare bird) “While I really enjoyed the race I was disappointed that we did not win and I was upset to hear one of the crew, eight year old Charlie Martin say about me ‘this is the scariest thing that ever happened to me’. I have really caught the Mermaid bug and I am looking forward to dropping in on the Mermaid Nationals which are in Howth 4-8 August and maybe doing a few DBSC races. I appreciated the offer to have a few pints with the lads after the race but I had to fly home. ”

The Kestrel circumnavigated Dalkey Island in Aideen and flew away safely when back ashore in the National Yacht Club. Charlie enjoyed his first race and quickly recovered from his Kestrel scare.

A Kestrel is a small bird of prey (raptor) with a distinctive hovering flight which lives on a diet of small mammals. It is not a sea bird. Kestrels are amber listed due to concerns over declining numbers.

If you would like to join the discerning raptor in sailing in a DBSC Mermaid either as a crew or as a Mermaid owner, please contact the Mermaid Sailing Association, any member of the Mermaid fleet or Dan Brennan, Dun Laoghaire Mermaid Class Captain 087 -7985218. You will be most welcome.