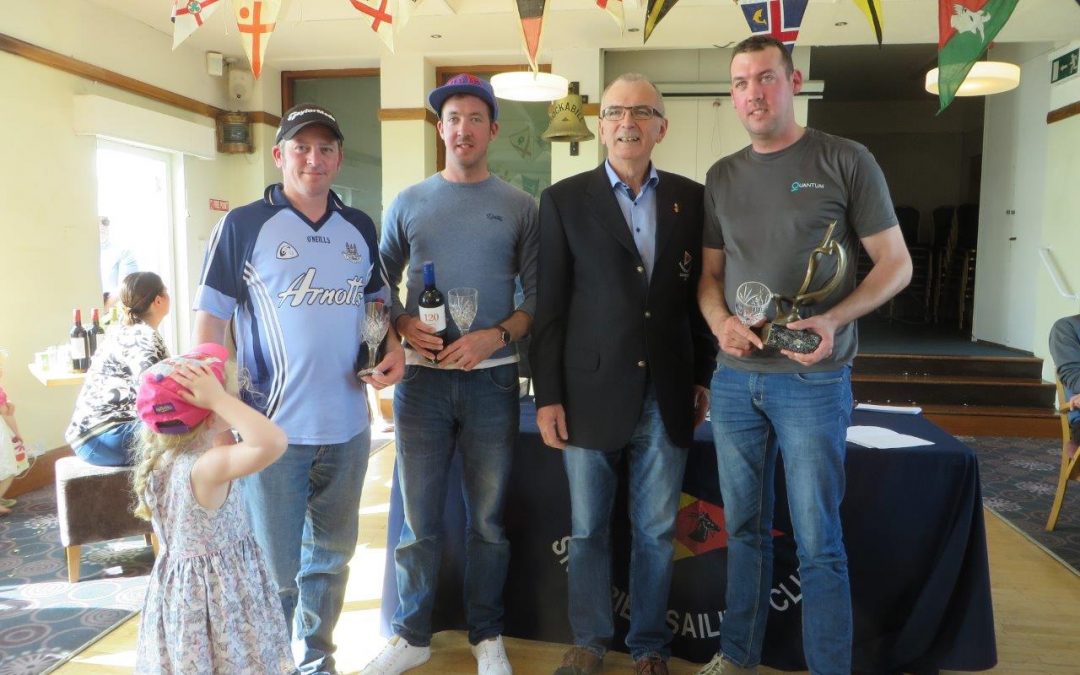 Last weekend saw the annual Skerries Regatta take place over Saturday and Sunday the 15th and 16th of July. With an ambitious 6 races planned (3 per day), an impressive fleet of 18 Mermaids took to the water, completing 5 races in total. The Regatta offered a variety of conditions and consistency was key for the top winners.

With the Mermaid’s annual National Championship being hosted by Skerries Sailing Club this year from the 5th to the 11th of August, it’s not surprising that the turnout was so good as many availed of this perfect opportunity to get some invaluable practice in for the main event.

Saturday the 15th of July saw some competitors struggle to make it out to the starting area with a low tide that wasn’t filling in fast enough making it very difficult for a number of boats to launch, as a result some Mermaids missed the first race. Competitors were met with a strong, fresh breeze and relatively flat seas as they made their way out to the race area promising for some excellent conditions. Sharing the course were the Fireballs that zoomed around in their element racing for their Leinster Championship as well as some yachts and various dinghies and e-boats. The first race got off to a clear start on schedule and it seemed that those that played the middle of the beat and then banked out to the right came out on top. Darragh Mc Cormack on 188 Innocence took 1st place with Sam Shiels on 189 Azeezy in 2nd and Vincent Mc Cormack on 119, Three Chevrons finishing 3rd.

Following the first race, the breeze picked up considerably and conditions were much more demanding for the second race of the day. The telltale sign was that, bar the top 3 boats, no other Mermaids flew their spinnakers once they had rounded the first windward mark. Frankie Browne on 135 Cara II was having a spectacular race and was lying 2nd, hot on Darragh Mc Cormack’s heels. Eye witnesses claimed the speed Frankie got up to on one of the reaches was the closest a Mermaid had ever come to foiling! The rush of it all must have went to his head as despite the breeze continuing to build on the next leg, Frankie again threw up the kite but unfortunately took a slip and ended up overboard knocking him out of Race 2! Three Chevrons who were right behind Frankie took up the challenge of catching Darragh Mc Cormack and a fantastic race between Uncle and nephew ensued. Three Chevrons managed to climb into the lead on the beat of the last triangle and under the impression that Darragh would most certainly be putting up the kite to get back into 1st place, Vincent threw his up without question (despite the breeze now being well up in the 20’s gusting higher). A bad squall at bad timing was one step too far for Three Chevrons and their 7 year old mast had had enough! A pretty clean break stopped the speed-hungry Three Chevrons in their tracks and Darragh went on to secure another bullet. 123 Vee helmed by Jim Carthy snatched up the 2nd place spot and a fantastic race out of up-and-coming Paul Browne on 146 Fugitive saw him finish in 3rd for what was a very demanding race to even finish. With the wind building and 2 mermaids now with broken masts, the Race Officer made the wise decision to call it a day and the fleet headed back to the club for a fantastic BBQ spread enjoyed on the sunny balcony overlooking the harbour.

Sunday the 16th saw somewhat calmer conditions but still with a great breeze for racing with lovely flat seas and plenty of sunshine. A strong fleet of Mermaids headed out for an 11am start and managed to get all 3 races in. Darragh Mc Cormack who was leading overall got another bullet in race 1 but it was closer racing with some great displays from the likes of Ross Galbraith on 185 who finished 2nd and reigning National Champion Sam Shiels who finished 3rd. Indeed Sam seemed to have found his rhythm as he went on to get 2 firsts in the remaining 2 races of the day pushing him up to finish 2nd overall. The racing in the fleet seems to have a great caliber of competition this year with a number of strong boats always appearing in the top 5 and plenty of others climbing the ranks so the Nationals should be very interesting to see who will claim the coveted title.

Having already won the Mermaid Munster title, ICRA Class 4 in both IRC and Echo on his J24 Stouche as well as the J24 Southern’s, Darragh Mc Cormack from Foynes Yacht Club continued his winning streak with his Mermaid 188 Innocence finishing 1st overall at this year’s Skerries Regatta. All of these wins are hard fought and this event was no different, reigning National Champion and local boat, 189 Azeezy helmed by Sam Shiels finished 2nd place overall with only 2 additional series points behind Darragh. Third place overall went to 123 Vee helmed by Jim Carthy and 4th place overall went to 186 Gentoo helmed by Brian Mc Nally. The event overall was a great warm-up for the fleet and now it’s all eyes on the Nationals with volunteers, competitors and everyone in between busy in preparations for the 5th of August. 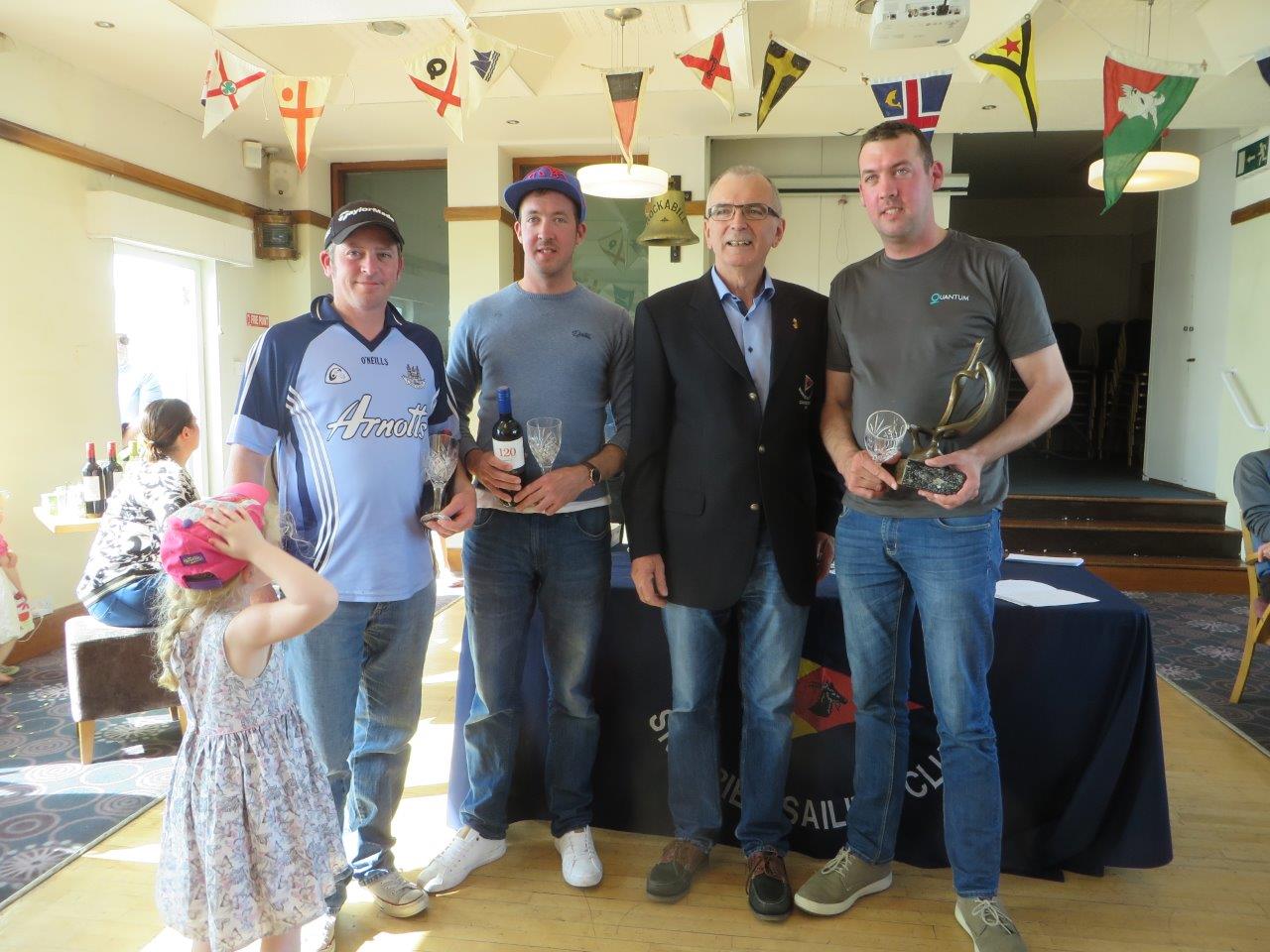 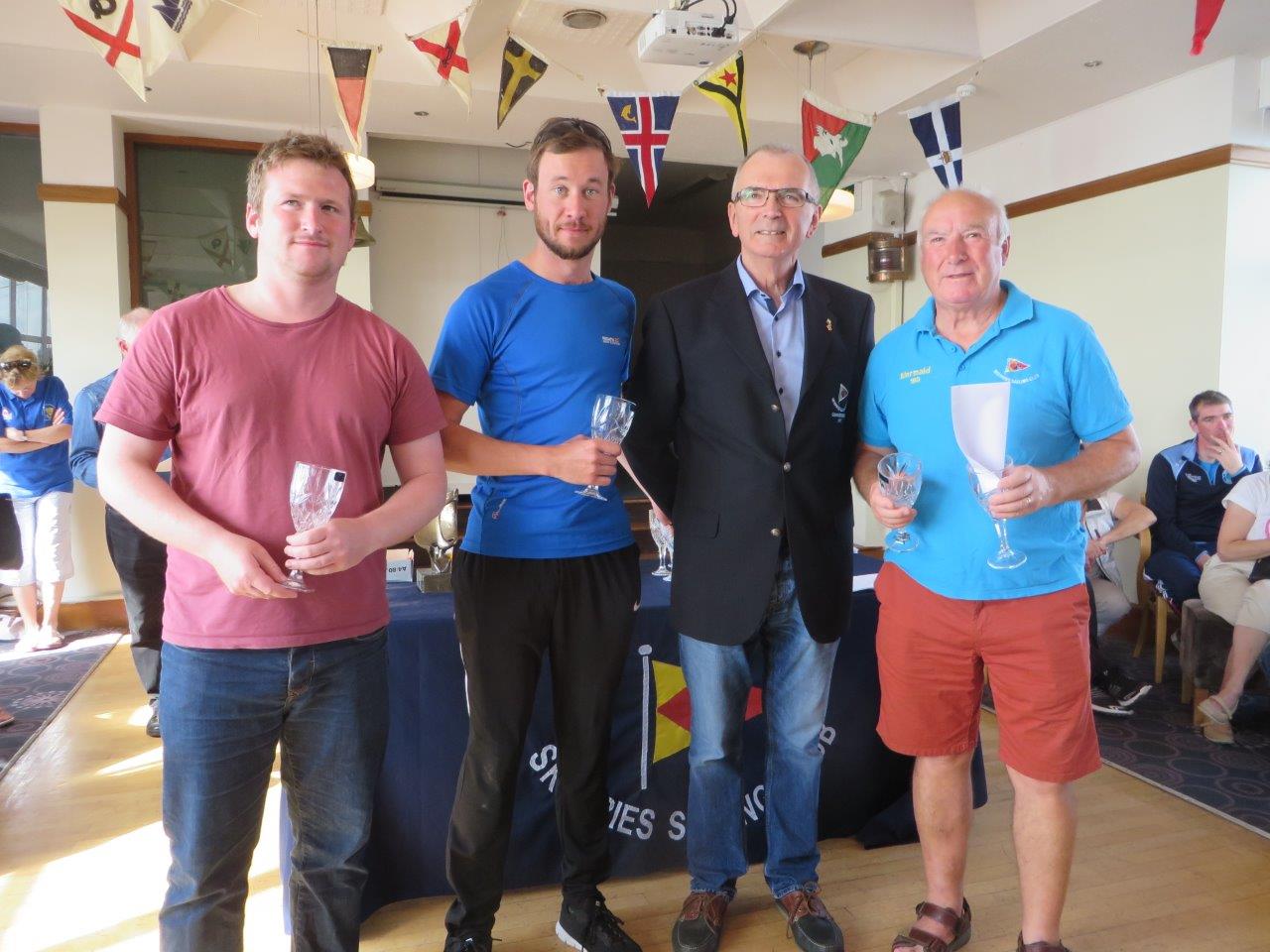 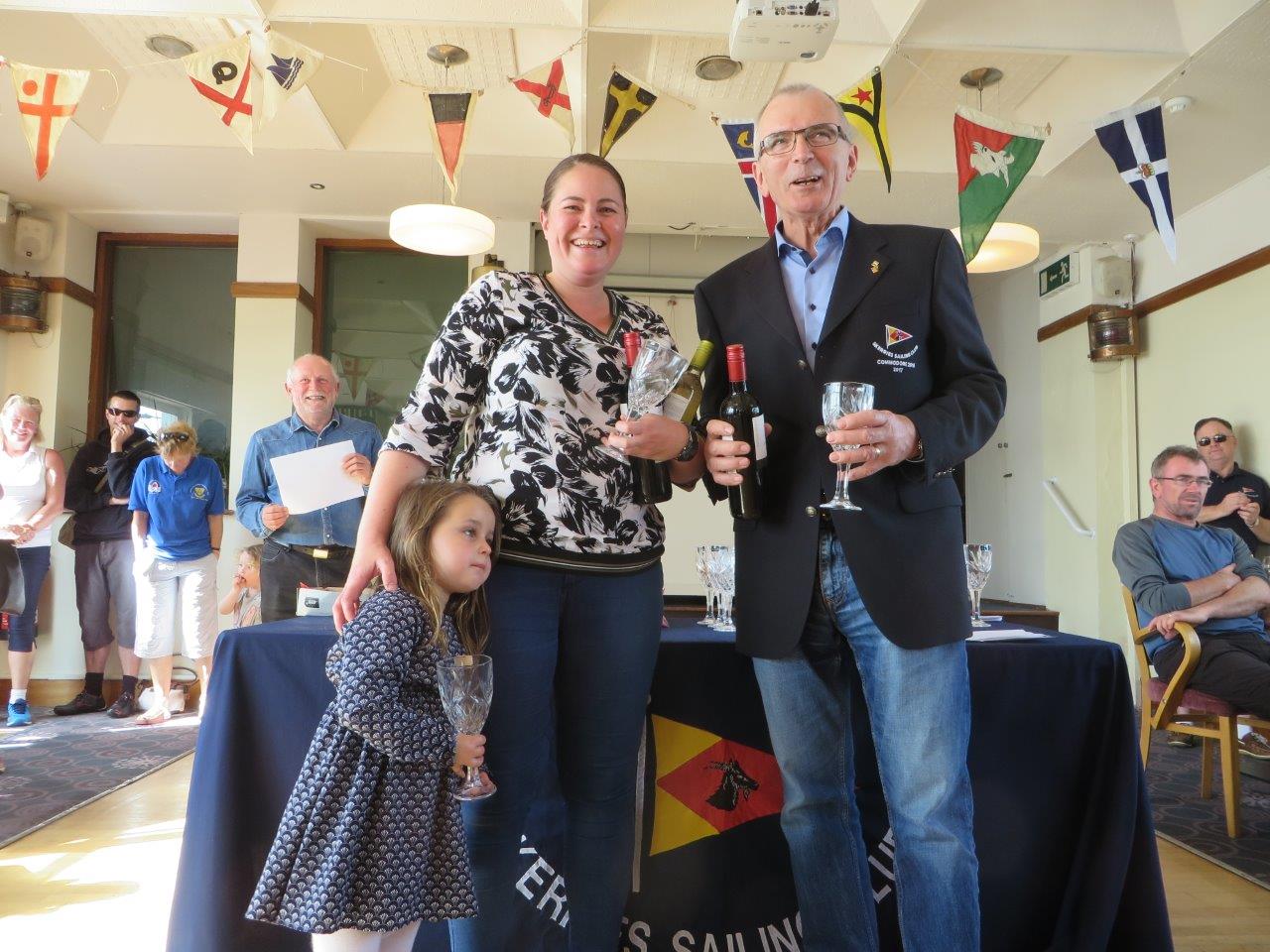 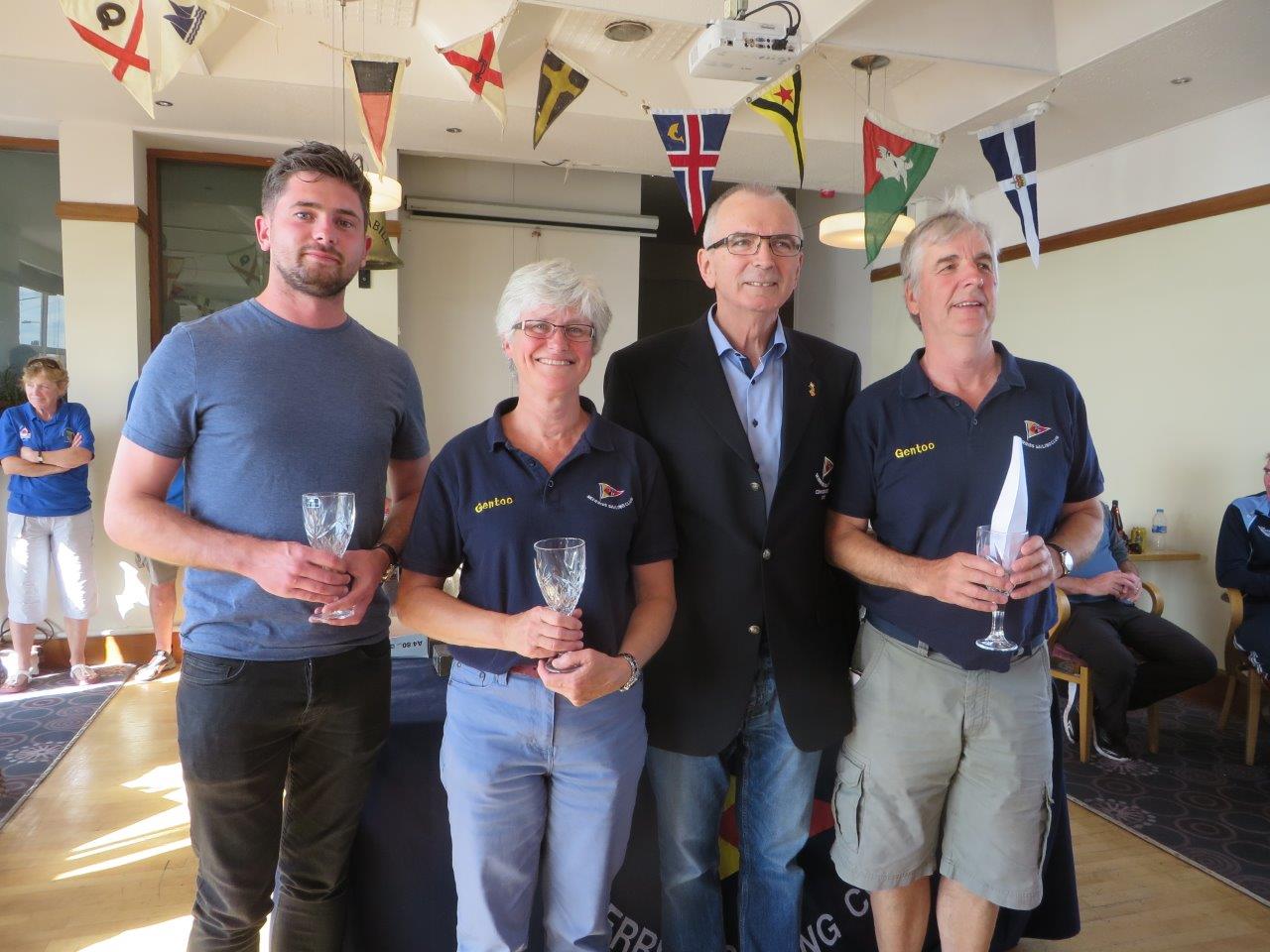 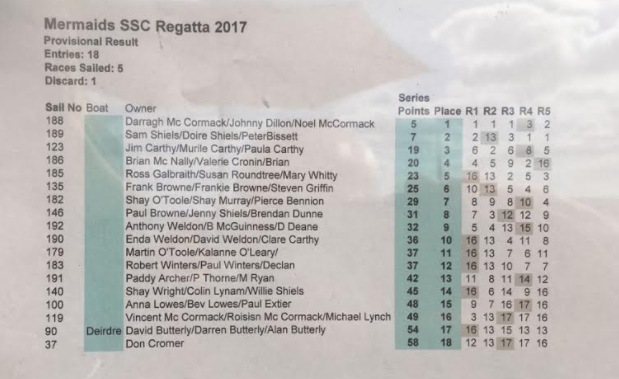