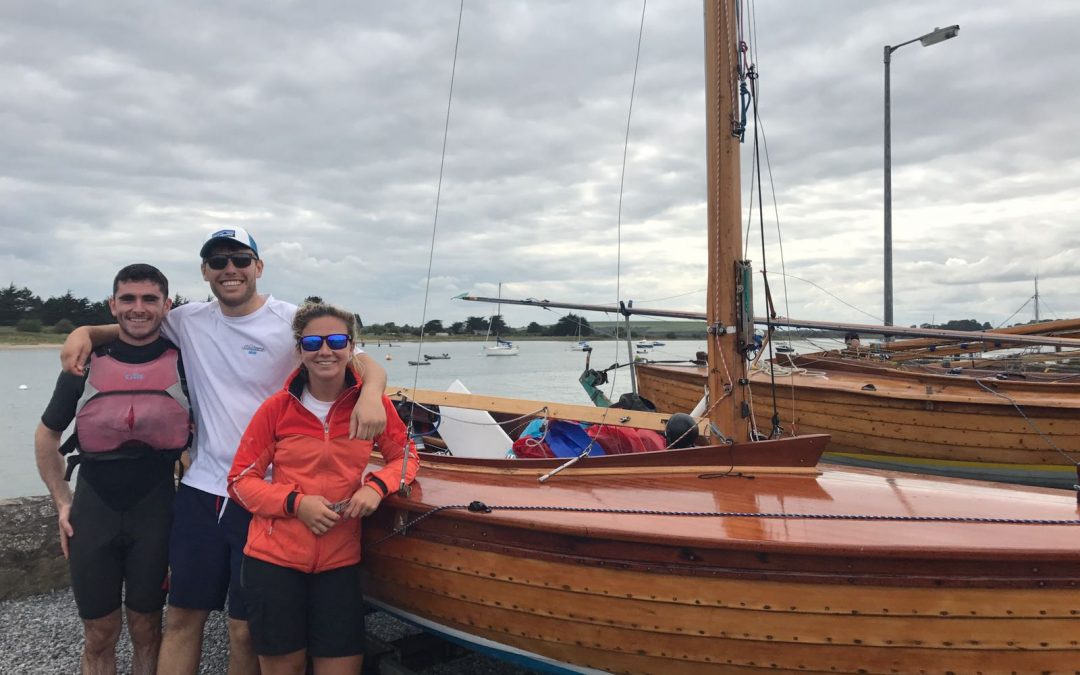 The annual Rush Regatta took place this weekend with 2 races held on Saturday the 26th and one race on Sunday the 27th. With a very light forecast given it was looking uncertain whether any racing would be going ahead at all but thankfully a nice breeze filled in and all 3 races were completed as scheduled thanks to an excellent job by Race Officer Liam Dineen and his team.

Saturday saw 11 Mermaids heading out to the racing area, navigating the narrow channel out of Rush Sailing Club with a coming tide to wake everyone up! As the majority of boats made their way out more Mermaids began to appear on the horizon, some of the Skerries crew had arrived, sailing ‘around the corner’ to take part. A total of 15 Mermaids got away on a clean start for race 1 and Mark Boylan on 177, This Is It got a great lead from the beginning. Paul Smith on 134 Jill gave him a good race but Mark held onto his lead securing him his first bullet of the day with Paul finishing 2nd and Foynes boat 119, Three Chevrons getting third.

It was fantastic to see an all-female Mermaid competing on the day, number 192 from Rush Sailing Club helmed by Brenda Mc Guinness with crew Cara McAuley and Ciara Monks who had a brilliant race finishing in 6th place.

Following the first race, a shifting wind and turning tide meant some decisive action was needed from the race committee in order to get a 2nd race in. The race area was moved significantly and once the wind finally decided to stay more or less put allowing a course to be set, a 2nd race got underway with minimal delay. The 2nd race presented a totally new set of conditions and challenges for competitors and it seemed those that banked hard-right up the beat came out on top. Boylan knew exactly where he was going, tacking onto port more or less straight off the line and even ducking a few boats to ensure he got out to the right hand side as early as possible. It paid off hugely and he was again in the lead to the first windward mark.

There was some great close racing amongst the rest of the fleet and it was brilliant to see newcomer to the Mermaids, Darrach Dineen on 36 Elizabeth, finishing in 5th place for this race. Boylan proved uncatchable securing his 2nd bullet for the day with 134 Jill again in 2nd place and local boat 190 Enda Weldon had a great race making up the top 3.

Sunday the 27th saw a lovely breeze of 10-12 knots, beautiful sunshine and mostly flat seas for the third and final race of the regatta. An extra Mermaid joined the fleet for the day, Jonathan O’Rourke on 77 Tiller Girl had come from the National Yacht Club bringing the total number of Mermaids competing up to 16. Boylan on 177 was again in the lead at the first windward mark but 119, Three Chevrons was hot on his heels and a great race ensued between the 2 boats. While Three Chevrons hugely closed the gap, Boylan proved his skill and racing knowledge, holding him off and securing first place, winning him the regatta overall with a flawless 3 bullets.

While 177 and 119 had been battling for 1st place, crafty fox Jonathan O’Rourke had snuck up in the background and expertly called the layline on the finish just pipping 119 to it and getting 2nd place. Speaking to Vincent Mc Cormack from 119 after the race, he described himself as ‘traumatised’ and ‘robbed in broad daylight’ by the light-air ninja Jonathan:

“He only came up here to ruffle everyone’s feathers, he wasn’t even racing yesterday. He should be handicapped when the wind is this light, I was robbed blind! One minute he’s back the fleet and you’re not paying attention to him, then before you know it you’re tacking for the finish and he’s ahead of you, he needs to be monitored, it’s not natural”.

Overall it was an excellent race with a lot of Mermaids finishing within seconds of each other. Final results on the day: Mark Boylan 177 in first place, Jonathan O’Rourke 77 in second and 119 Three Chevrons finishing 3rd. Jill 134 had battled with Jonathan 77 for the majority of the race and secured 4th place. With two seconds and a fourth, 2nd place overall went to Paul Smith on 134 Jill and 3rd place overall at the Regatta went to Vincent Mc Cormack on 119 Three Chevrons.

Congratulations to Mark Boylan with his crew Cliodhna Connolly and Aileen Boylan (crewing Saturday) and Andy Sexton (crewing Sunday) and well done to all involved. It was a great weekend of racing and a perfect way to close out the 2017 season for Mermaids. Congrats also to Anthony Weldon who won a voucher from Mermaid class Sponsor Union Chandlery. While this was the last big event for the Mermaids, club racing will continue for September and even up until October for some clubs with the class. 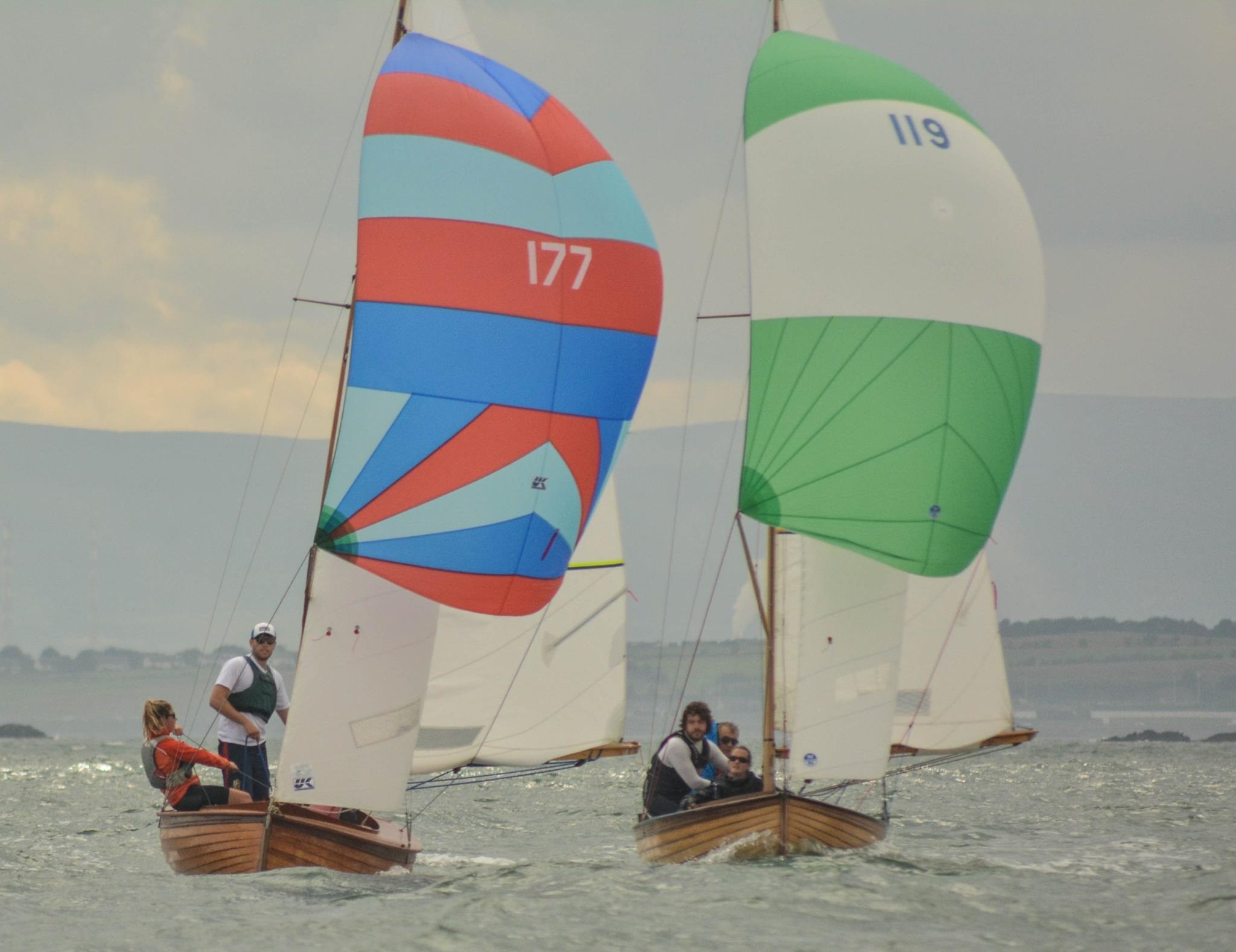 177 This Is It (Skerries Sailing Club) and 119 Three Chevrons (Foynes Yacht Club) enjoy close racing in the final race on Sunday. 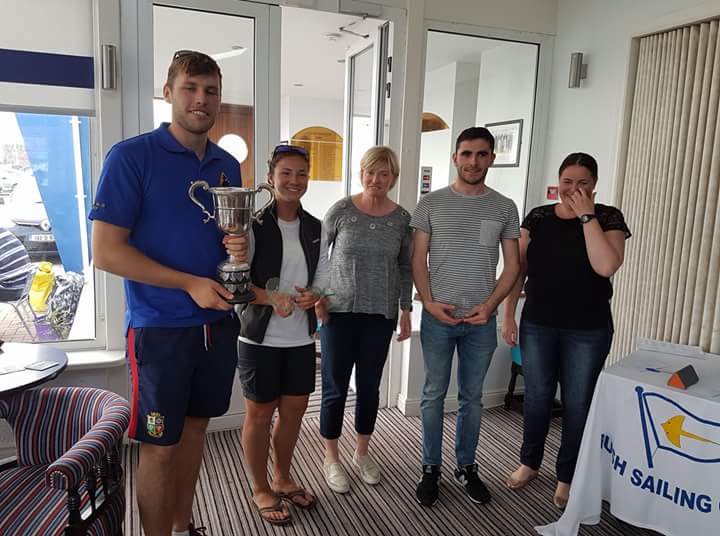 Group photo of some of the Mermaid class taken outside Rush Sailing Club to celebrate the end of a fantastic season.

Final results for the Mermaids at the 2017 Rush Regatta.