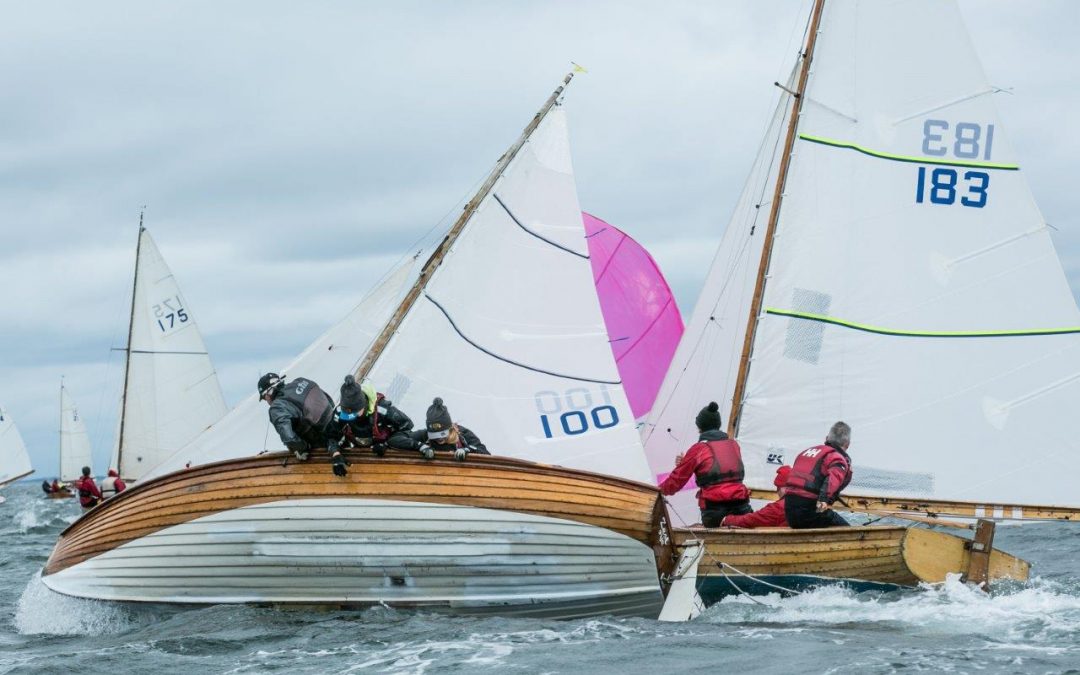 This week sees Skerries Sailing Club hosting the 2017 Dublin Bay Mermaid National Championship for what is the classes 85th anniversary year. With 26 entries in this beautiful one design class, the past few days have seen all types of conditions thrown at competitors. A practice race on Saturday the 5th gave everyone a chance to get tuned up and ensure their boats were floating!

Things quickly got serious with the first days Championship racing on Sunday the 6th which saw lively conditions and 2 full races completed as scheduled. The 2 bullets on the day went to 123 Vee, helmed by Jim Carthy from Rush Sailing Club and 188 Innocence, helmed by Darragh Mc Cormack from Foynes Yacht Club. Both these boats are known to love the heavier conditions and it showed on the day. As far as records show this was a milestone day for Foynes Mermaids as Darragh secured the first ever National Championship bullet for a Foynes boat.

Cliodhna O’Leary from Skerries Sailing Club has been out on the water documenting the action over the past few days and had the following to report on days 2 and 3 (Monday the 7th and Tuesday the 8th):

Monday the 7th of August saw day 2 of the Mermaid National Championship taking place at Skerries Sailing Club. With 2 races planned, the day started off in bright sunshine with the race committee of Liam Dineen and his team setting their course early so the start was on time in tricky conditions which were very light and shifty. The right side of the first beat paid off with 135 Frankie Browne rounding the first mark in the lead with 190 Enda Weldon and 179 Conor O’Toole in hot pursuit. It was lovely to see number 100 helmed by Anna Lowes from Foynes Yacht Club in 7th at this stage.  Frankie in 135 led from the 1st mark rounding to the finish securing himself a well deserved National bullet, with last year’s Champion 189 Sam Shiels making his way through the fleet after a slow start to get second place. Enda in 190 held on for 3rd with 177 Mark Boylan and 119 Vincent McCormack making up the top 5.

With the SW wind coming off the land fading conditions became even more difficult for the second race. Former champion Jim Carthy 123 described conditions on the start line as some of the most difficult he had ever sailed in. Both sides of the beat appeared to have ‘holes’ causing frustration levels to rise! The very experienced Jonathan O’Rourke on 77 Tiller Girl rounded the weather mark first followed by 185 Ross Galbraith second and 189 Sam Shiels third. With the wind fading and the strong ebb tide kicking in it looked as if the race would have to be abandoned but a light sea breeze spread across the course and 77 Jonathan was away round the next weather mark. With the tide under him he opened up a large lead and with the other boats struggling to round the weather mark he was away. The race committee decided to shorten the course at the next weather mark with the resulting top 5 as follows: 1st 77 Jonathan O’Rourke, 2nd 189 Sam Shiels, 3rd 188 (Darragh McCormack overall leader after day 2), 4th 134 Paul Smyth and 5th 186 Brian McNally.

Day 3, Tuesday the 8th of August started in glorious sunshine with a light NW breeze. After a close start across an even start line 77 Jonathan O’Rourke showed a clean pair of heels up the first beat.

Coming round after the first triangle 77 was still in the lead but with 189 Sam Shiels closing in with these 2 opening up a big gap. Shay O’Toole in 182, one of the oldest sailors in the fleet, rounded the mark third and overall had a fantastic race which won him the daily Daphne prize. The wind held true and these three finished in the same order with 186 Brian McNally and 188 Darragh McCormack making up the top 5.

Following one Championship race on Tuesday, the crews race immediately followed with a great turn-out of 14 boats taking part. It was fantastic to see so many young helms taking the command and the winner was Frank Browne (jnr) helming Jonathan O’Rourke’s boat no. 77, Tiller Girl. 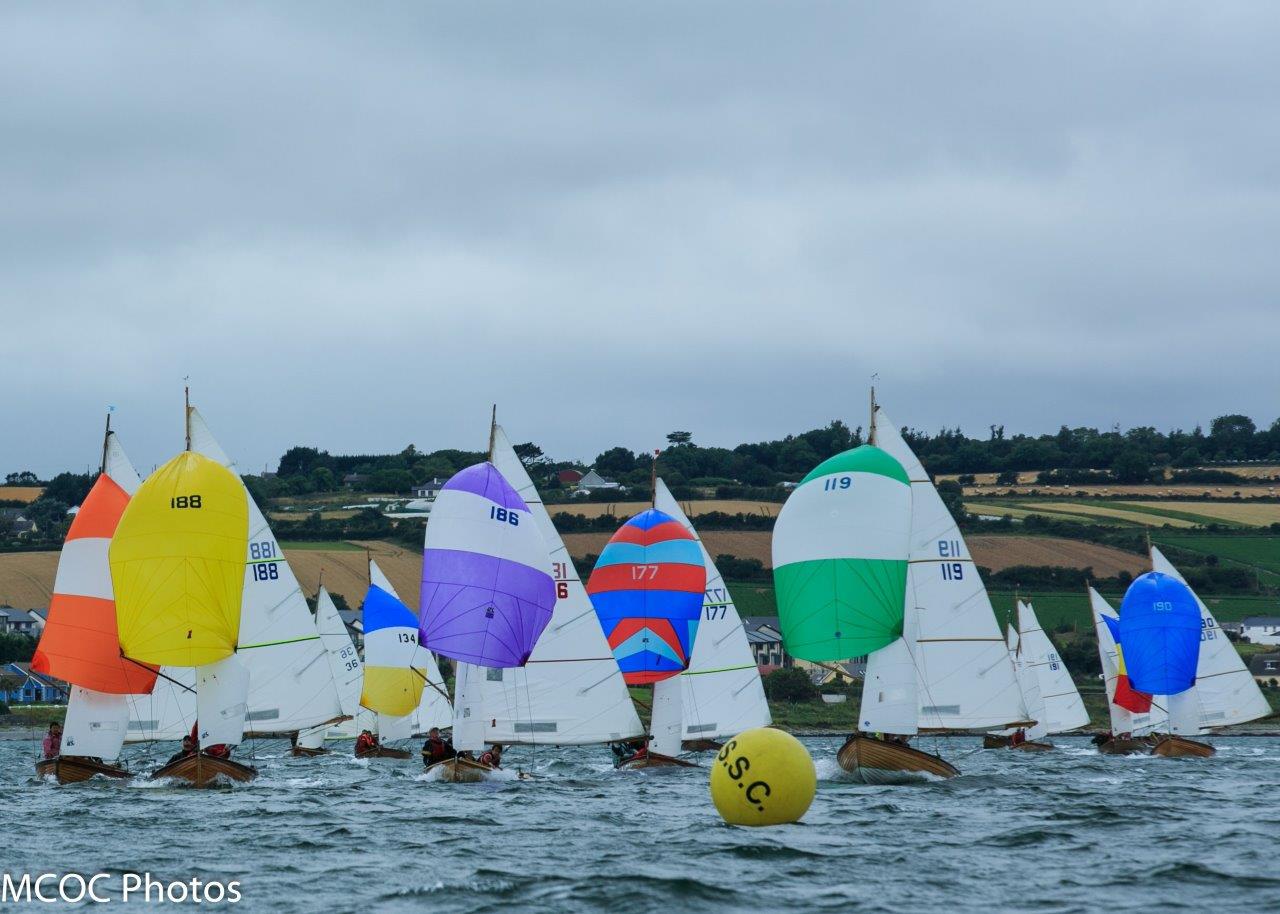 Wrapping up on Tuesday the 8th after 5 championship races (with one discard) the leading positions were Sam Shiels, Azeezy no. 189 in first place on 9 points, Darragh Mc Cormack, Innocence no. 188 in second place on 11 points. Jonathan O’Rourke in third place on Tiller Girl no. 77; fourth is Vee no. 123 and fifth is Cara II no. 135.

Day 4, Wednesday the 9th of August again gave tricky conditions for competitors with light, shifty wind. Past Champion Jonathan O’Rourke on 77 Tiller Girl cemented his well known reputation for loving the shifty, light airs securing 2 more bullets pushing him well up the leaderboard in 2nd place overall. With very little wind, a big swell and the tide turning halfway through the racing a lot of people found it hard to stay consistently up at the top. In the second race the wind dropped off that bit too much and the Race Committee made a welcome decision to shorten course following the second run.

With cracking sunshine at Skerries Sailing Club following the day’s racing, Roisin Mc Cormack, MSA Captain spoke to local competitor Mark Boylan on how he had been finding the first few days racing:

“Overall really good racing, tricky conditions but great courses and very competitive fleet. It would be nice to see a bit more wind for the final 2 days, it’s shaping up to be a close finish for everyone” – Mark Boylan 177, This Is It, Skerries Sailing Club.

Liam Dineen, the National Race Officer for the event also had the following comments on the past few days and his hopes for the final 2 days Championship racing:

“We’re hoping for a very competitive series and very close racing. We have been delighted to get all races in so far as scheduled. We’ve had very fast turnaround between races and I think it’s the first time that I can remember that the crews race went ahead in it’s scheduled spot, and it was great to see 14 boats out for this. We would hope for a bit more wind which we know is coming Friday but we would like to have one of those better days of racing on Thursday. It’s still looking light so we’ve delayed the racing to 2pm tomorrow in hope that we’ll have more breeze. It’s great to see more younger members of the fleet coming through again for example Mark Boylan, Conor O’Toole, Paul Browne, Darragh Mc Cormack. And having new faces to the fleet like Darrach helming 36 Elizabeth. It’s great to have the owner of Elizabeth on one of the mark boats getting to see his boat being sailed. Overall the weather is great and proving very hospitable with plenty of sunshine and we’re delighted to have all the Mermaids back in Skerries for this special anniversary Nationals” – Liam Dineen, National Race Officer

With only 2 overall series points between them, Sam Shiels (17 points) and Jonathan O’Rourke (19 points) are currently battling it out to win the coveted title. A strong performance from Foynes boat, 188 Innocence sees him lying third and still in with a chance to come back into the running with 25 points. The next 2 days will be the decider and with the racing postponed until 2pm tomorrow instead of the usual starting time of 12 there are hopes more wind will fill in for the 2 scheduled races tomorrow.